I have been experimenting with painting in inverse colours.
As often happens with me, this idea had a long gestation. It first occurred to me in 2014, when I noted some thoughts about colour reversal in a sketchbook. But it wasn't until 2016 that I made the first inverse colour painting. The Brexit referendum was the trigger and the painting came out in a rush the day the shock of the result came through. I took Brexit very personally as a kick in the face for truth, generosity and decency, for the values I love about my country, a kick in the face for many of my friends, my family and people I love, and an assault on the vision that underlies my painting and my work.
I made some occasional paintings in inverted colours as a channel for my rage and despair at the unfolding Brexit tragedy. For the first time I found myself drawing on the tradition of "history painting", asking myself how the intrinsic means of the medium of painting may be used to address public and political issues.
When the Covid crisis struck, I started to experiment more intensively with inverted colour, making a series of re-mixes of my own previous paintings. Whilst artists were being enjoined to provide positive, even heroic, images expressing hope - which are undoubtedly valuable in times of crisis - I saw inverted colour as a way to register the pervasive feeling of fear and anxiety.
The allure that inverting colour has for me is not as a technical exercise but as a starting point for a "dereglement" of the primary element of painting - colour. I have always been fascinated by the gap in all representational painting between what is depicted and how itâs depicted. Painting opens up this gap and paintings hold our attention by provoking the imagination to cross the gap and see something in them. However this is a process that the eye can slip into very easily and the easier it does so, the more the characteristic pleasures of painting drain away. Inverting colour is a strategy of resistence, to put some obstacles in the way. 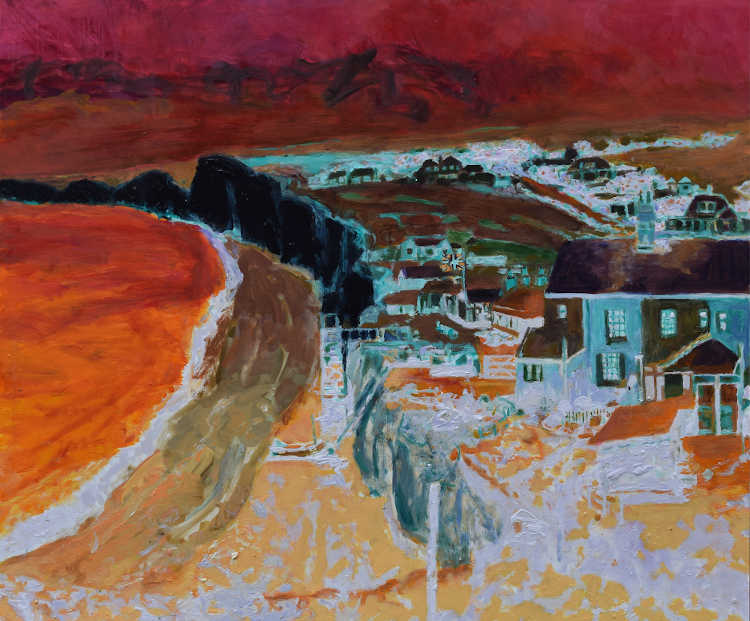 Birling Gap. 24 June 2016. Oil on board. 100 x 122cm. This was the first painting I did in inverse colours. I made it the day immediately after the Brexit vote. The painting is a view of Birling Gap and the Seven Sisters cliffs on the South coast of England. At its centre is a Union Jack flag, torn, also with its colours inverted. The painting links elements of my family's history with critical moments of national crisis in a place that has a strong symbolic resonance with English identity - the Seven Sisters, those iconic white cliffs. My father lived here as a child with his mother and sister during the Battle of Britain and through the subsequent bombing, barred from going down to a beach cut off by defensive barbed wire. When the farm next door got a direct hit from a doodlebug, my granny evacuated with the children to the North. Members of the family are still in the area. The end terraced house in the painting used to belong to artist friends and an artist lived next door too. I used to go and stay until, one by one, the terraced houses have had to be demolished, as the crumbling cliffs of England are relentlessly eaten away by the sea. 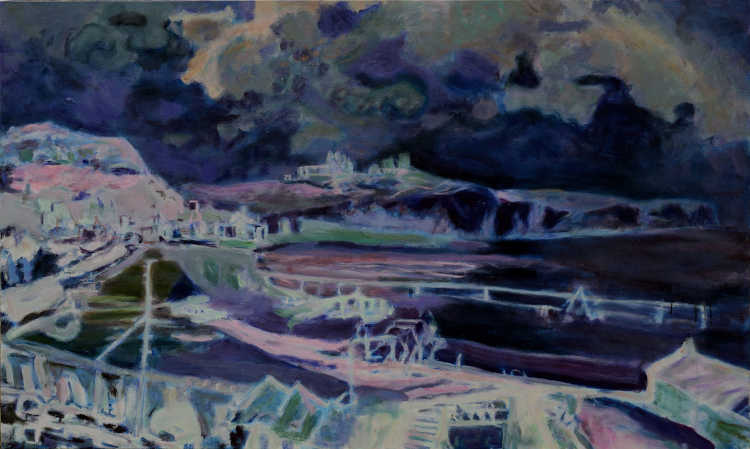 The Port at Dover (after Kokoschka). Oil on canvas. 76.5 x 128cm. This picture inverts the colours of a painting of the port of Dover by Oskar Kokoschka. During the course of his extensive travels in Europe and North Africa in the 1920s, Kokoschka visited Britain and made a series of paintings here, including this one of Dover. In the 1930s with economic depression and the rise of facism, travel was less possible. Kokoschka settled in Prague, but fled in 1938 narrowly escaping the Nazi invasion. It was Britain that gave him refuge. Kokoschka consistently opposed fascism. During the war, he donated money from sales of his work to help starving and orphaned children on both sides of the conflict and he came to see himself as a defender of the values of European culture. My inverse version of Kokoschka's painting was completed during the autumn 2019 as parliament battled to prevent a No Deal Brexit. The painting provided an image to express my fear and forebodings, by making visible the national reversal of the European values that Kokoschka held dear. Dover is not only symbolic for its white cliffs, it is also one of the places in the country where the effects of Brexit on movement of goods,services and people between the UK and Europe will be most clearly seen and obvious, and especially so if there is no deal, a danger that has not altogether gone away. 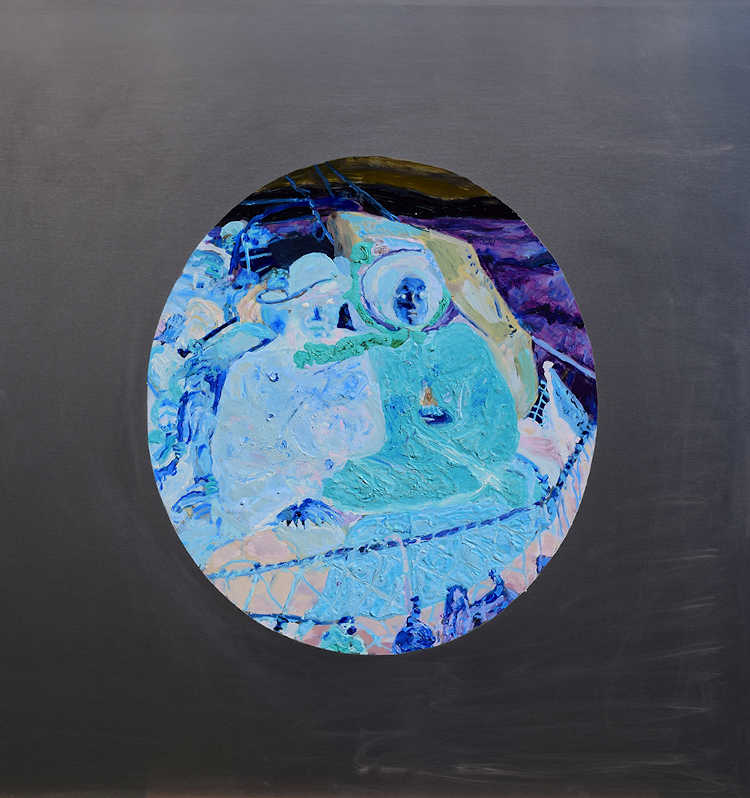 In making this picture I was reflecting upon attitudes to migrants. Ford Madox Brown made his iconic painting, The Last of England, to draw attention to conditions in England in the mid nineteenth century that were forcing people to leave the country to seek a "better life" in the colonies. In inverting the colours of his painting I had in mind the position of migrants coming the other way and the national shame of the reception they have received as a consequence of the government's deliberate adoption of a "hostile environment" policy and the fanning of anti-immigrant sentiment in the media. I invite English viewers to make the imaginative leap of seeing themselves as migrants rather than colonists. Perhaps then they would not so willingly throw away the precious right to freedom of movement in neighbouring countries. 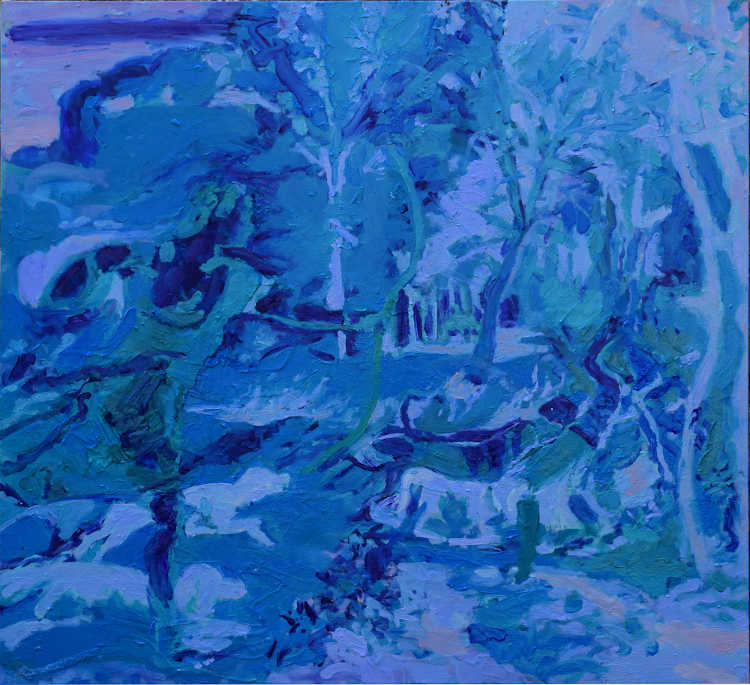 Hounds of death (after Titian). Oil on canvas. 92 x 100cm. I have long been fascinated by Titian's painting, "The Death of Actaeon", which is the first painting I head for every time I visit the National Gallery. Its story of Actaeon in the moment of being hunted down by his own hounds and killed by a goddess on account of a random encounter seemed even more relevant in the current circumstances of the Covid pandemic. Titian experienced plagues in Venice and eventually died of the plague. There's so much more I could say about Titian's painting, I learnt a lot in my attempt at re-painting it, not least that the original remains insuperable. 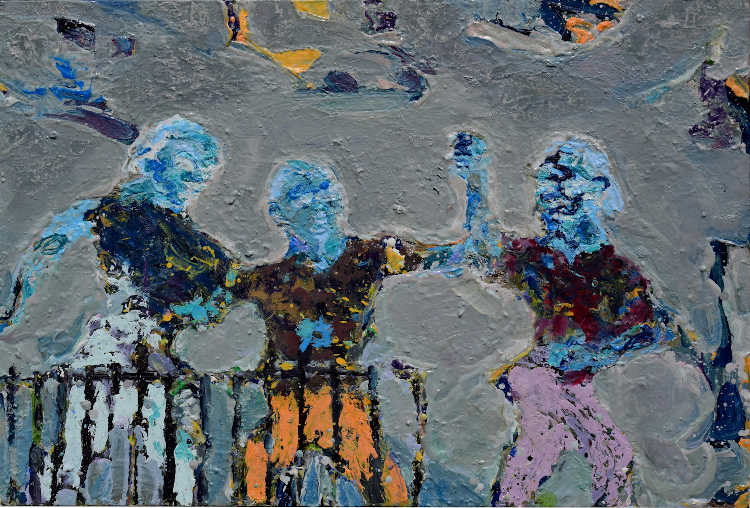 Three children. Oil on board. 62 x 93cm. During the Covid lockdown I turned to my previous paintings to experiment with a series of "re-mixes", inverting the colour. In this painting I painted directly over an original painting I had done 20 years ago, at first directly substituting the inverted colour on top of the original, but as the painting proceeded I ended up re-working it freely on its own terms.

Existential paintings for existential times. These are a series of paintings I did during the Covid lockdown, experimenting with painting on aluminium. With the city closed down, I re-visited paintings I had made of London's street life. I was working from small, imperfect, inverted images of the original paintings (which can be located in the Street Scenes and Urban People galleries on this website) painting directly onto the unfamiliar shiny aluminum, and all these obstacles overwhelmed my endeavour to get through to the content of the painting - a shared urban streetlife which Covid had so suddenly erased.